Top horse studs may gallop away.


Coolmore and Darley horse studs,  which have produced champions including Redoute's Choice, Exceed and Excel and Fastnet Rock -are at serious risk because of decisions to award coal mining leases by former Minister Ian MacDonald.

The Anglo American open cut coal mine also threatens to operate only 500m away from their fencelines.

"It's frightening to think what could happen," said Tom Magnier, who oversees the stud for his family, which also operates in Ireland and Kentucky.

40 of the 93 horses running at Randwick today were sired by either a Coolmore or Darley stallions.

Together they employ up to 300 people and horses sired at their studs generated almost $50 million in sales at the recent Easter yearling sale in Sydney.

"This is special thoroughbred land and has been for more than 100 years. It's very difficult to accept we are now at risk because of these dealings."

A world class academic has described the proposed Doyles Creek Training Mine as "absolute madness" making them "wonderful candidates for organ donors".

Professor Ian Plimer today told the ICAC corruption hearings into Doyles Creek Mine that he attended a meeting with disgraced Minister Ian MacDonald and Mr John Maitland where the proposed training mine was raised with him.

I was quite appalled by it really," Prof Plimer said.

"The last thing you would want to do is have young students in a training mine, underground."

"The students are wonderful candidates for organ donors and Darwin Awards" (a term for people who died in stupid circumstances).

"I said (to them) it was absolute madness and it was not the university's role to be operating a training mine."

It is alleged that Ian MacDonald at that time was courting the Professor to head up a new school of geosciences at the University of Newcastle.

The thing that came to mind (at the meeting) was it was a good way (for the university) to go broke very quickly," Prof Plimer said.

The hearings at ICAC continue.

Are you interested in uniting with
other local people who want to
keep their district Coal mine and Gas fi eld free?

Residents of Bureen, and Horseshoe and
Martindale Valleys have already met and
are working towards declaring their
community coal and gas free.

We can do the same
join us at a meeting in Denman
at the Memorial Hall on
Tuesday 9th April at 6.30pm

Enquiries John Kaye 0431 169 853
keepdenmancoalminefree@exemail.com.au
Posted by Galoot at 14:29 No comments:

Signs of the times


Jerrys Plains locals gathered on Saturday to alert the broader community about the perils facing their town and district by current mining activity and mine proposals.

The group erected an arresting series of four billboards displaying the prime agricultural land in the area, and dire pictures of what will become of the district should the current mining proposals proceed.

Local resident Bryan Chapman said, “We want people driving through this very fertile land to understand that it is under immediate threat from coal mining. What they see now – the world-class horse studs, the vineyards, the super-productive farmland – will be turned into an enormous underground and open-cut coal pit. The coal will be shipped overseas and burnt, and what’s left of the water will be turned into poisonous waste.”

The signs were designed and funded by the “Jerrys in Jeopardy” community group, formed to alert the community to the imminent threats posed to the district by mining proposals that encircle – and undermine – the district.

Local farmer Ian Moore is dismayed at the prospects for Jerrys Plains should all the proposals go ahead. “One of the main problems – corruption notwithstanding – is that each mine and mine extension is looked at in its own right, without taking into account the cumulative impacts of all the other current and proposed mining activity. If every mining proposal for this area goes ahead, combined with what’s already going on, Jerrys Plains and this entire community will cease to exist. With it will go the land that produces the finest food, wine and thoroughbreds that Australia and the world have to offer.”

Earlier this year, Jerrys in Jeopardy hosted a community meeting where over 100 local residents voted unanimously in support of a motion to suspend all new mining activity close to the historic village.

One of the proposals threatening the town is currently the focus of an ICAC inquiry, with explosive corruption allegations surrounding the granting of the controversial NuCoal/Doyles Creek Mining Exploration Licence. A proposed underground “training” mine, it claims it requires the coal resource of around 500 million tonnes to support the training of around 100 students. In the face of staunch local opposition, the company has continued to demand access to alluvial lands for exploratory drilling. 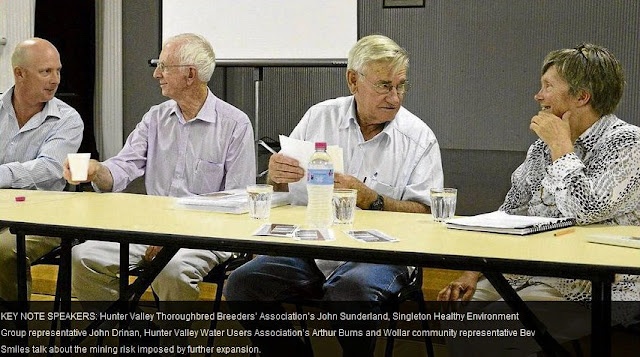 More than 100 concerned farmers, vignerons, thoroughbred breeders and villagers packed the Jerrys Plains community hall to hear the latest discussion on the risks associated with mining.

One fact that all the speakers spoke about was that the cumulative effect of mining was not being properly addressed by government when considering new mines or expansions.

Dr John Drinan from the Singleton Shire Healthy Environment Group said the larger the coal mines the bigger the health impacts that come with it especially when it comes to air quality.

“A report from the Upper Hunter Air Quality Monitoring Network said that there were only six days last year that the PM 10 concentration went over the national standard,” he said.

“But if you went through the actual records there were hundreds of hours measured where it exceeded the national standard.

“Even one hour’s exceedance is damaging to health and this is from the existing mines.”

What was a big concern for Dr Drinan was that airbourne particles known as PM10s could also become more dangerous when chemicals became attached to them, something that hasn’t been properly explored yet.

HUNTER Valley Water Users Association’s Arthur Burns and Hunter Valley Thoroughbred Industry Breeders’ Association’s John Sunderland reinforced how important the water system is for every industry in the Hunter and that could be risked when mine operations approach river systems.

“Once you put a dragline through the alluvial flats or expose water aquifers that are detrimental to the Hunter River they’re gone for hundreds even thousands of years,” Mr Burns said.

Wollar community representative Bev Smiles asked that the people of Jerrys Plains take the opportunity to speak up and lobby to your local Member of Parliament or take part in Planning Association Commission public sessions to voice your  concerns.

“People have to work together to ensure their community isn’t the next village lost,” she said.
She asked that people assist in the costs of fighting court cases by pledging money to the Environmental Defenders Office.

“If you win one that will really make people look seriously at the model and hopefully change the decision making on new mining proposals.”